In this blog we are going to covers Android Looper, Handler, and MessageQueue. These are the core component in Android OS which is essential to create an unblocked responsive UI.

Looper is a worker that serves a MessageQueue for current thread. Looper loops through message queue and sends messages to corresponding handlers to process.

Android application maintain a queue of task that need to be update the UI thread is know as MessageQueue.

These are among the building blocks of Android OS. Whenever we create a new thread is one-time use only and die after executing its run method. But in Android UI thread kept alive while the application is running so there is a role of looper which helps to keep alive the UI thread which loop through MessageQueue to execute the task on Android UI thread.

Kindly, go through the below image for better understanding. 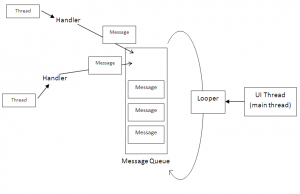