While developing mobile apps, communicating with the server to fetch or store data is the primary need of most of the mobile apps. One of the most popular format for the data transfer is JSON.

The most easy way is to parse the JSON manually. Manual decoding can be done using the built in JSON decoder in dart:convert. Using manual decoding requires the use of following function jsonDecode(). This function returns Map<String, dynamic> which can be parsed to read the required values.

Let’s see an example of manual JSON parsing with the following model:

Setting up json_serializable in project for serialization

We need to add below dependencies in the pubspec.yaml file of your project.

Run flutter pub get inside your project root folder (or click Packages get in your editor) to make these new dependencies available in your project.

Let’s create a class name User with the file name as used.dart for an example:

While creating json_serializable classes the first time, you may see the error as below image: 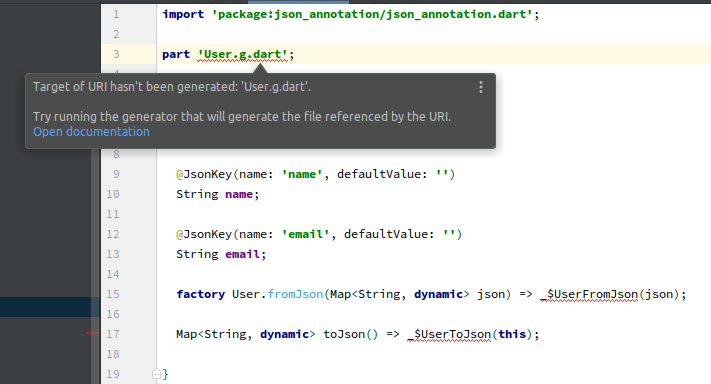 This is just a normal error which came just because currently generated code of the model class does not exist. To resolve this we just need to run the below command on terminal.

NOTE: You need run this command every time you make changes in your model class.

Finally, we need to know how we can use the model class in the our code. We just need to pass our JSON response and get the results.

Now we can use the model easily with more code safety.

When I think in getting solutions for my Ecommerce Platform, I think of Webkul. They have been such a blessing in our business. We have spent thousands of dollars in support and modules from them. We love their support team. They work very closely with us, and they always go the extra mile when we need help.