Should we use SVG and VectorDrawable in the Andorid app ?

Then, the answer is yes.

Vector drawables allow us to replace multiple png assets with a single vector graphic, defined in XML. While previously limited to Lollipop and higher devices.

No Multiple PNG’s based on densities.

How to tell AAPT that we are using <vector> for Pre-lollipop versions.

For v2.0 or above of the Gradle plugin: we have to add the following in the module level gradle.build

However to technical bug described below:

First up, this functionality was originally released in 23.2.0, but then we found some memory usage and Configuration updating issues so we it removed in 23.3.0. In 23.4.0 (technically a fix release) we’ve re-added the same functionality but behind a flag which you need to manually enable. – ANDROID TEAM

So in order to enable the configuration, we need to add the following in each activity where we are using Vector images or in the Application class of the project.

How to use SVG image ?

We can convert the SVG image into <vector> using Asset Studio.

Here are the steps for converting SVG into Vector Drawable Compat. 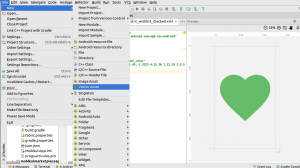 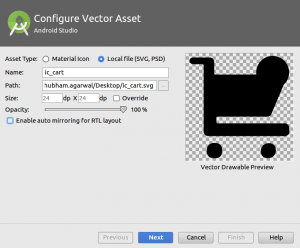 We can also use online open source tools for conversion:

The line android:src=”@drawable/ic_wishlist_checked”  will give the warning as we need to use